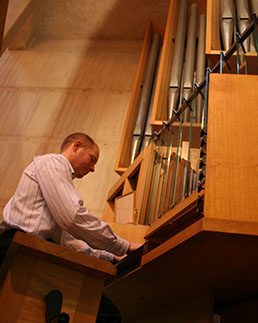 At Clifton we have one of the finest neoclassical organs in Europe made in Austria by Rieger. Its design reflects the hexagons upon which the Cathedral is based. Stephen Bryant (the Cathedral Organist) is a great ambassador for the instrument and skilfully adapts all kinds of repertoire to it. The organ voluntaries reflect the intentions of the particular liturgy, integrating with the musical styles used within that too.

The organ was cleaned and restored by David Wood of Huddersfield in 2010.

There is also an Allen electronic organ in the gallery used for occasions such as can be heard here.

Stephen Bryant is Organist and Junior Choir Director at Clifton Cathedral as well as teaching at Ss Peter & Paul Catholic Primary School within the Cathedral’s parish. He was educated in Newcastle-upon-Tyne, and whilst in the sixth-form he was Organ Scholar at Newcastle Cathedral. He moved to Manchester University to read music, during which time he studied the organ with Gordon Stewart, directed several choirs and orchestras as well as being Organ Scholar at Blackburn Cathedral. After graduating he completed a PGCE course before initially teaching in Liverpool. In 1999 he moved to Bristol and has since taught in several schools within the city and its locality.

Stephen Bryant has been Organist of Clifton Cathedral since September 2000, a post he combines with his full-time teaching post. He has undertaken various recordings, broadcasts and tours, both as soloist and with the Cathedral Choir, including broadcasting live on BBC1 and BBC Radio 4. He is in demand as an organist and has performed throughout the United Kingdom, Europe and America. Stephen is an experienced choral and orchestral conductor and in 2017 founded the Clifton Cathedral Junior Choir which attracts choristers from across the diocese.

The Lord’s my Shepherd, I’ll not want, He makes me down to lie In pastures green; He leadeth me the quiet waters by. My soul He doth restore again;
And me to walk doth make within the paths of blessedness ev’n for His own Name’s sake. Yea, though I pass through shadows of death yet will I fear no ill; for Thou art with me; and Thy rod and staff me comfort still. My table Thou hast furnish’d in presence of my foes; my head with oil thou dost anoint and my cup overflows. Goodness and mercy all my days will surely follow me; and in my father’s heart alway my dwelling place shall be and in my heart forevermore Thy dwelling place shall be.